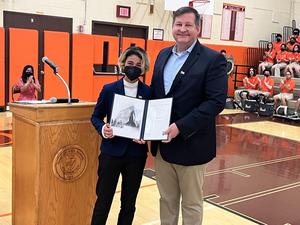 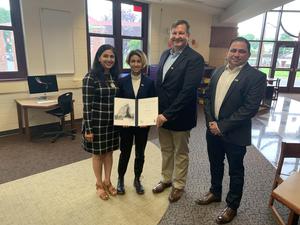 Angel received her Certificate of Appointment to the Air Force Academy during today's Memorial Day ceremony.
DHS would like to acknowledge Angel Durve on her appointment to the United States Air Force Academy.  Angel will be starting at the Air Force Academy on June 17th.  As part of our Memorial Day program, Angel received her Certificate of Appointment from Mr. Garrett Ogden, retired Officer United States Air Force.  Angel plans on studying Astronomical Engineering, and would like to be a test pilot or an astronaut.  DHS is so proud of Angel, and we wish her the best of luck on her military career.